(OSGA, Melbourne, 13 August 2016) Following the political turmoil and mass unrest ignited in Ethiopia, and despite the concerns of the international communities are perceived by their fellow citizens after hundreds of Oromo civilian peaceful protesters were killed, including the primary school children, in a show of grossly excessive force by the Ethiopian government heavily armed security forces since last Saturday, 6 August 2016. 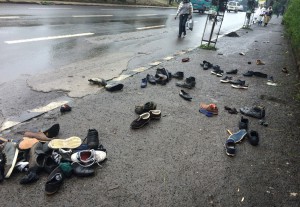 Within three days alone at least 400 Oromo civilians were killed. More than 5000 injured while thousands were disappeared in the form of arrest and transferring to detention centers, such as Dhidhessa, Tolay, and Hurso and to several tens of hidden torture locations in Oromia. The detainees are held incommunicado and tortured by state security forces into “confessing” to anti-government protesters.

The Ethiopian security forces fired live bullets at protesters peacefully marched in more than 250 major towns across Oromia region. Heavy-handed measures including the arbitrary arrest by using excessive force have resulted in the unlawful killing of hundreds of Oromo civilian protesters. A wave of enforced disappearances has seen thousands of people abducted by armed forces.

For instance, one of the eyewitnesses observed the brutality of the Ethiopian government troops at scene on 6 of August 2016, [for security reasons name not identified] heartbreakingly stated,

…As all of you may have been aware of, there was a protest that took place in Mandi [one of the towns in Western Oromia region] last Saturday [6 August 2016] in which people got killed and injured in numbers. The city has been under military siege, by cutting everything from the city. Movement of people in and out of the city was restricted, and everything was under lock down condition for the last four days. During this time, a massive number of people (men and women) arrested and the jail is over crowded with people and our people are in a dire situation.